How Does Google Make Money? (Hint: It’s All About Ads)

If there are three companies that are dominating the technology space, they are — Apple, Microsoft, and Google. And you know how Apple and Microsoft makes money. But, do you know how Google makes money?

Sixty billion dollars ($60 bn). Guess what? That was the annual revenue (and it was $37 billion when I first published this blog post back in 2012) of the world’s largest search engine, Google, in 2014.

But how is that really possible when they hardly have any tangible products or when they don’t charge a penny for most of their products and services?

Recently, I came across this interesting thread on Quora.com where Oliver Emberton answered the question “If I want to become an entrepreneur, where do I start?“.

Think of a company as a machine you design and build. Your ‘machine’ always has certain parts. It sells something to someone, and re-invests some of that to help make more sales in future. What’s left over is profit for the owners.

And then he cited Google as a money machine and summarizes everything as an infographic:

So, How Does Google Make Money?

In Google’s own words…

Today, the majority of our revenue comes from advertising.

Advertisers are increasingly turning to the Internet to market their products and services. Google AdWords, our auction-based advertising program, enables advertisers to deliver relevant ads targeted to search queries or web content to potential customers across Google sites and through the Google Network, which consists of content owners and websites.

Our proprietary technology automatically matches ads to the content of the page on which they appear, and advertisers pay us either when a user clicks on one of its ads or based on the number of times their ads appear on the Google Network.

We distribute our advertisers’ AdWords ads for display on the Google Network through our AdSense program. We share most of the revenue generated from ads shown on a site of a Google Network member with that member.

But Wait, We Don’t See Any Ads On Google

Google’s homepage is clean with no content or ads or popup (here’s why). And what’s interesting is that, almost all Google products and services that we use are absolutely free — whether it’s Search, Gmail, YouTube, Drive, Docs, Picasa, Maps, Earth, News, Analytics, Blogger.com or their Mobile Apps.

Then how do they make big bucks? It’s all about advertising.

Google has a very popular auction based advertising program called — Google AdWords. With Google AdWords, you can advertise your business on Google’s search result pages. That’s where most of the revenue comes from.

If you have noticed Google’s search results when you perform any of your web searches then you can see “Ads” across search result pages.

These ads are obviously sponsored by advertisers on Google AdWords who pays Google every time you click any of those ads. So, if you search for “loans” or say “insurance” on Google then you’ll  find ads relevant to “loans” or “insurance” itself.

For instance, you can search a commercial keyword like “buy insurance” on Google.com to see ads related to “insurance“.

That’s not all! Google also has a publisher program called Google AdSense and it allows over a million publishers like me (and probably you) to make money by displaying relevant ads on our websites or blogs.

When it comes to website monetization, Google AdSense is every webmaster’s choice. Thanks to their huge ad inventory.

Google’s advertising model is revolutionary and its essence lies in Google’s innovation. Google makes money from their advertisers and the advertiser pays only for performance (that is, only when someone clicks on their ad).

This is contrary to traditional banner advertising where advertisers are required to pay whenever their ad is displayed on a banner network.

And the consumer who is searching for something on Google sees only ads related to what he is searching. So, it is this advertising  model that creates a win-win-win situation for Google, Advertisers, and the Consumers.

The price an advertiser pays for a click (known as Cost Per Click or simply CPC) usually depends on a lot of factors. Google is using a kind of bidding system. You select the keywords for which you want to show ads so that when someone searches for those keywords on Google, your ads will be shown.

The price you need to pay Google depends on the competition for that particular keyword(s). Now, if there are several other advertisers bidding for the same keyword then most probably you will have to outbid them to show your ad on top.

The Cost Per Click (CPC) varies from $0.01 to $100 (or maybe even more). For example, advertisers are willing to pay as high as $54 per click for insurance, mortgages, and loans related keywords.

We all have seen how the smartphone market exploded over the past few years. And the result? The mobile search market is also growing and soon mobile devices will be the primary way of accessing the web.

That’s why most of the Google products are designed for mobile users as well (Google’s 2013 mobile revenues were around $8 bn).

Google’s mobile advertising is powered by AdWords itself and it makes Google money when people click ads on Google from their mobile devices. That’s not all! Google also has a mobile advertising platform, called AdMob, which is designed for mobile apps.

You see a lot of ads within several apps when you use different mobile apps, right? If so, then there is a good chance that it’s powered by Google’s AdMob.

Whether it’s Android or iOS or Windows Phone, some of the most popular mobile apps belongs to Google. They’re all free but it further accelerates Google’s mobile advertising revenue.

Google Play is a digital distribution platform where they charge developers and publishers for hosting and marketing their products.

With the acquisition of Android and Motorola, Google entered the devices space and now they are selling a wide range of mobile devices and gadgets like phones, tablets, wearable devices, etc.

What About Apple & Microsoft?

When it comes to Apple or Microsoft we all know how they make money. Apple makes most of its money selling iPhones and iPads. In fact, iPhone and iPad sales accounts for over 70% of Apple’s revenue. 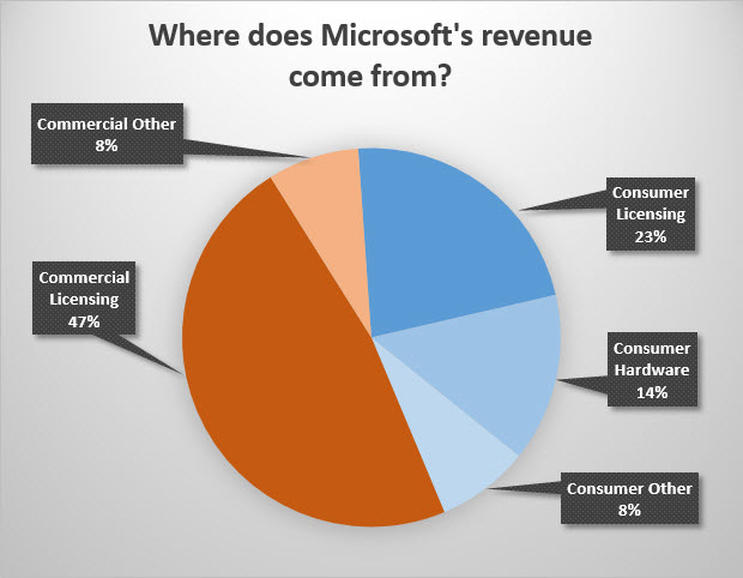 Read: OneDrive vs. Dropbox vs. Google Drive vs. Amazon Cloud Drive vs. iCloud

Now that you know how Google make so much money when they are offering most of their services for free. But have you ever wondered how Google search works?

A few years back Google released an interactive infographic that shows “How Search Works” (Tip: You can also hover your cursor (or can click on it) over certain image elements to learn more about it.).

It explains “Google Search” in a graphical way and also explores the major search features and algorithms (for example, how they fight spam).

The infographic is divided into three parts and it starts by saying how Google creates “The Index”. That is, Google navigates the web (made up of 60 trillion web pages and counting) by crawling from one web page to another by following links.

And it keeps a copy of each unique web page that it finds to make it searchable and it’s collectively called “The Google Index” (It’s over 100 million gigabytes in size).

The next part is about how Google uses its search algorithms (that is, computer programs and formulas) to find the web pages that you are looking for — in order to deliver the best results possible.

And the last part is about how Google fights spam. Google says the majority of spam removal is automatic (that is, it uses algorithms to filter out spam from its search result pages) but they also take manual actions against questionable websites.

They also give you a chance to take a look at the web pages that were removed from the Google Index few hours back as live spam screenshots.

Even after so many acquisitions and business diversification, over 90% of Google’s revenue still comes from advertising.

Again, 70% of this ad revenue is from Google AdWords (that is, Google owned web properties like Google.com, YouTube.com, etc.) and 30% from Google AdSense (partner networks and websites).

Now you know that the biggest search engine is also the biggest advertising company in the world. 🙂

11 Reasons Why I Love Google Photos — And You Should Too

Over 51 Evernote Tips & Tricks To Make You An “Evernote Ninja”